Welcome to the milk-ed project training. Here you will find training about lactose-free products. Please note that you can download the material

Lactose is a carbohydrate, a disaccharide composed of glucose and galactose, which are interconnected by glycosidic bonds. The concentration of lactose in milk of different mammals ranges between 0 – 10%, the average value of lactose in cattle milk is 4.7%.

Lactose is not very sweet (16 % of lactose is as sweet as 1% of sucrose), so it is not often used as a sweetener. Lactose can be only found in milk, but due to its beneficial properties, it is added to other products. In the first year of a child’s life, lactose in breast milk is the most important source of energy but has no special nutritional value for adults.

Milk sugar is a typical compound of milk and represents the largest share of milk solids, it is an indicator of milk quality and animal health. If an animal is suffering from mastitis, its milk has a lower content of lactose.

There are two types of lactose decompositions in milk processing and consumption. In the digestive tract and in lactic acid fermentation.

In both cases, the process requires the enzyme lactase. In hydrolysis process, lactase first separates lactose into glucose and galactose and then ferments glucose into lactic acid. 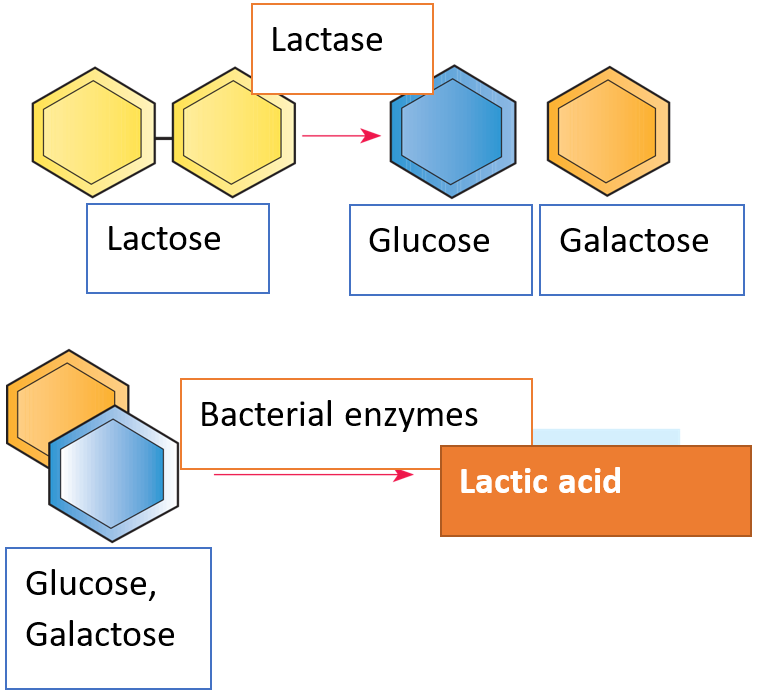 Decomposition of lactose in the digestive tract

Our body decomposes lactose before it comes to the digestive tract. Intestinal villi secrete the enzyme lactase (β-D-galactosidase), which in the process of hydrolysis breaks down into two simple sugars, glucose and galactose, which can be absorbed. As milk (and lactose) intake decreases, lactase production also gradually decreases in most mammals (usually associated with growing up).

Lactose intolerant individuals can not secrete the enzyme, so lactose is not broken down and thus forms gasses in the intestinal microbiota, causing bloating, flatulence, indigestion, and other symptoms. The absence of the enzyme lactase occurs less frequently if milk (cattle, goats, sheep, …) is an important part of the diet. Individuals with lactose intolerance can use medications and dietary supplements with lactase enzyme activity, or consume lactose-free milk and dairy products (i.e., it is broken down during production).

People who do not tolerate this sugar have a deficiency of β-galactosidase in the small intestine. This enzyme is present in mammals during lactation, but in most individuals, β-galactosidase activity decreases after this period, which is characteristic of primary hypolactasia and causes symptoms of lactose intolerance. This disorder affects about 70% of the world’s adult population. The prevalence of lactose intolerance in Western countries ranges from 4 to 50%.

Secondary lactose intolerance is caused by medical conditions such as Crohn’s disease, ulcerative colitis, gastroenteritis, celiac disease.. diseases that cause a deformation of the intestinal villi, and a decrease in lactase secretion. It is important to note that lactose intolerance is not the same as milk allergy. Milk allergy is caused by proteins, not carbohydrates, and therefore lactose-free milk is not suitable for people with milk allergy.

Lactose is important for the production of fermented dairy products

Some microorganisms, especially lactic acid bacteria, can break down or ferment lactose into lactic acid and some other compounds, which is extremely important for the dairy industry. Lactose disaccharide is hydrolyzed to glucose and galactose monosaccharides. They can be completely decomposed into CO2 and water (oxidative metabolism) or fermented. Fermentation usually produces various products such as organic acids (lactic acid, butyric acid, etc.), alcohols (ethyl alcohol, butyl alcohol, etc.), and gases (hydrogen, carbon hydroxide, etc.). The most important form of fermentation in milk is the lactic acid fermentation of lactose into lactic acid. This reaction is used in the production of cheese, yogurt, and other acidic products. In addition, bacterial enzymes secrete lactase and cause the breakdown of lactose into glucose and galactose. Glucose is fermented into lactic acid, and galactose becomes part of glycolipids and glycoproteins.

Lactase in the milk-making process

Milk-making demands the use of industrially produced lactase, which can be obtained from yeasts such as Kluyveromyces fragilis and Kluyveromyces lactis, or from fungi such as Aspergillus niger and Aspergillus oryzae. The primary purpose is to decompose lactose in milk and make it suitable for lactose-intolerant people. Lactase is also used in the production of ice cream. Since glucose and galactose are sweeter than lactose, lactase tastes better. Lactose also crystallizes ice cream at low temperatures, but it is important that the products remain liquid and have a fine structure.

The enzyme lactase can be found in bacteria, fungi, and yeasts. In plants, it is found mainly in almonds, peaches, apples, and apricots. By commercial and industrial criteria, the most commonly used sources of β-galactosidase (lactase) are molds Aspergillus and Kluyveromyces.

β-galactosidase obtained from bacteria is used for the hydrolysis of lactose due to its high activity, easy fermentation, and enzyme stability. It is obtained from the probiotic bacterium Bifidobacterium and is used in food and for pharmaceutical purposes. Bacteria of the Lactobacillus species, originally isolated from the gastrointestinal tract of piglets and widely used in the production of fermented dairy products, are commonly used (in addition to Streptococcus thermophillus, Lactobacillus bulgaricus is a starter culture in yogurt production). Due to the bacterium Lactobacillus, β-galactosidase (lactase) is also present in human intestinal microbiota, where it accelerates the fermentation of lactose. By measuring the activity of this bacterium, we can determine the ability of the intestinal microbiota.

Yeast Kluyveromyceslactis is one of the most important sources of lactase and it is often used in the dairy industry. The optimal pH of lactose obtained from this yeast is between 6.0 and 7.0.

In addition, cold-active acid lactase (isolated from a strain of the psychrophilic yeast species Guehomyce spullulans) is used in the food industry for the hydrolysis of whey and milk. The activity of different lactases is affected by the presence of different ions. Yeast lactases from Kluyveromyces lactis and Kluyveromyces fragilis require ions such as manganese (Mn2 +), sodium (Na +), and magnesium (Mg2 +), while the presence of heavy metals and calcium (Ca2 +) inhibits enzyme activity.

Mold-derived lactases have an optimal acidic pH range from 2.5 to 5.4 and are therefore more efficient at hydrolyzing lactose in acidic substances such as whey. Molds produce very stable enzymes. The most common sources of mold lactases are some species of Aspergillus. Aspergillus oryzae produces lactase, which is sold openly as a dietary supplement. Lactase enzyme activity occurs 4 hours after ingestion.

Lactases also prevail in plants, where they contribute to plant growth, lactose hydrolysis, and fruit ripening. The enzyme participates in the ripening of sesame seeds by reducing the content of galactosyl in the cell wall, which facilitates the process of fruit ripening. Lactase from papaya causes hydrolysis of the cell wall and consequent softening of the fruit during ripening. Active lactase is also found in the cell wall of strawberries (Fragaria ananassa), where the fruits soften due to the release of free sugars during ripening. 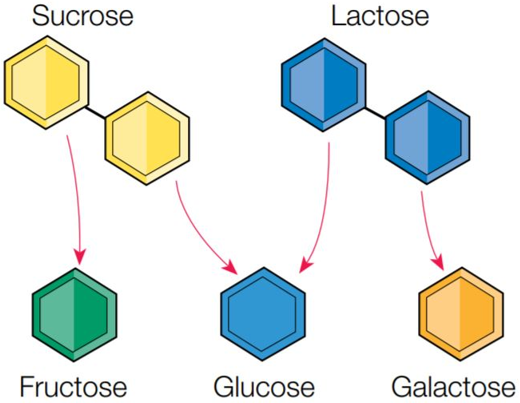 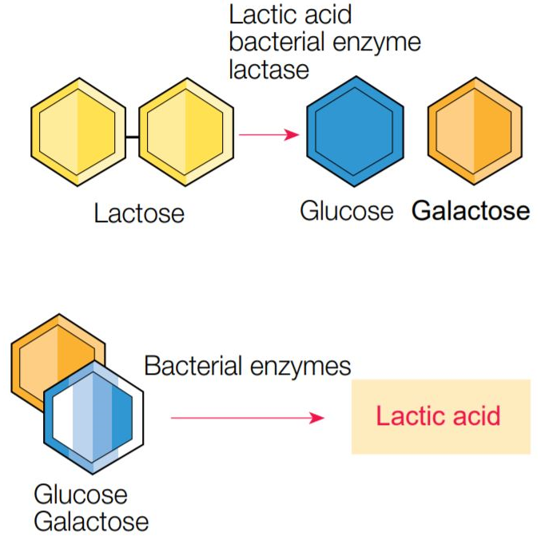