Homogenization is a standard industrial process which aims to reduce and even out the diameter of fat globules in milk and cream, by applying high pressure. The aim of homogenization is to increase the stability of the milk fat emulsion, i.e., to prevent the separation of fat on the surface of the milk during standing still.

Homogenization breaks down fat globules, which diameter in cow’s milk varies from 1-5µm (0.1 – 22µm), and usually ranges from 3-4µm (see Milk fat module). One of the most important differences between goat’s and cow’s milk is in the structure and composition of milk fat. The average size of fat globules in goat’s milk is 2 µm, so it is often said that goat’s milk is naturally homogenized.

In the usual homogenization process, fat globules with a diameter of less than 2 µm are formed, and the number of globules can be increased up to 100 times, and the total surface area of the globules up to 6 to 10 times. Thanks to homogenization, the separation of milk fat/cream on the milk surface is reduced.

The homogenization process is applied in the production of drinking milk (pasteurized and sterilized), where in addition to preventing the separation of milk fat on the surface, homogenized milk gets a fuller and richer taste, as well as increased viscosity. In the production of fermented dairy products, in addition to increasing the stability of milk fat, homogenization also achieves a more difficult separation of milk serum due to the higher hydration of homogenized fat globules.

Homogenization is not recommended for milk intended for the production of cheese, especially semi-hard and hard cheese, because it leads to a violation of the technological properties of milk. Also, cream for butter production is not homogenized.

Milk homogenization is usually performed at a temperature of 50 – 60°C and a pressure of 150 – 200 bar (15-20 MPa). The homogenizer must be placed so that heated milk gets into it, i.e., the milk fat is in a liquid state. It is most often placed in the line of milk pasteurization, i.e., the milk after preheating and separation/standardization goes to homogenization, and then returns to the pasteurizer for heating to the pasteurization temperature. In addition to homogenizing the entire amount of milk, partial homogenization can also be performed, when only the cream or part of the cream is homogenized after leaving the separator, and then the homogenized cream is mixed with skimmed milk and pasteurized (Figure 1). 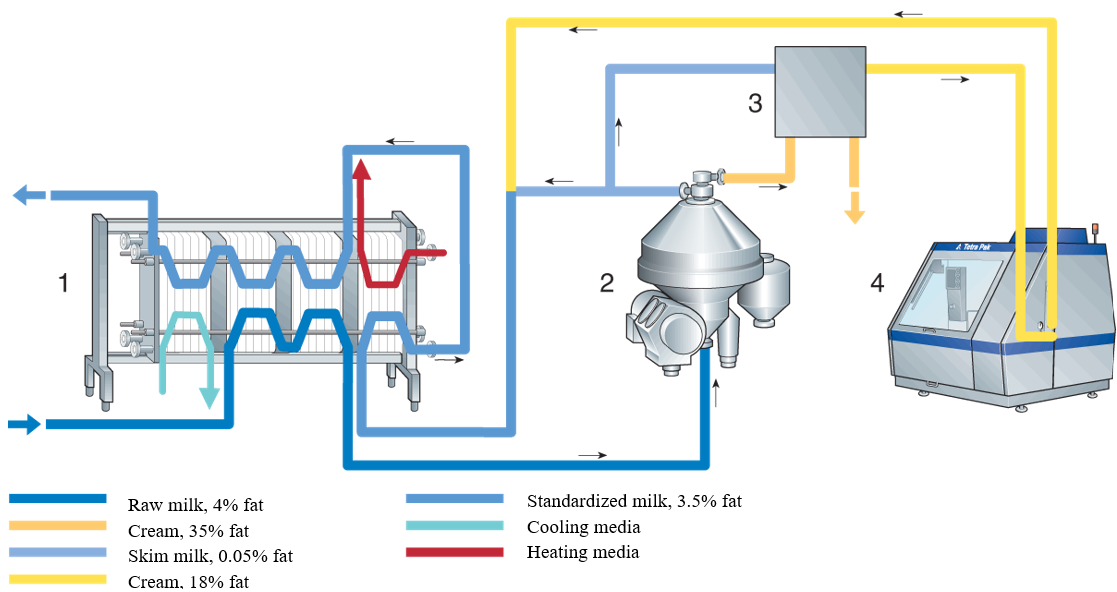 The figure shows the appearance of fat globules in raw milk, cold raw milk, and homogenized milk during the storage. 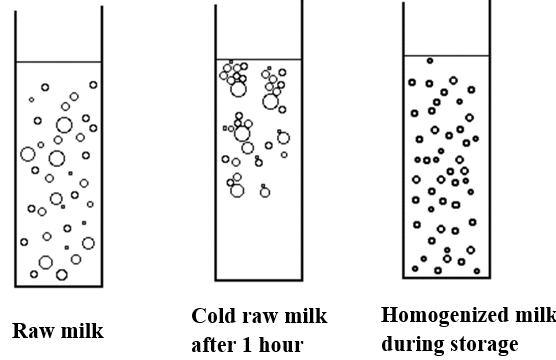 The first homogenizer was patented in 1899 by August Gaulin in France. First, consumer pasteurized milk was homogenized in order to prevent the separation of the layer of milk fat – cream on the surface of the milk during standing. The construction of each homogenizer consists of several high-pressure piston pumps and a homogenizer valve system. The main part in the homogenizer is the homogenization head with valves, which can be of different constructions. Non-homogenized milk passes through small valve openings and then fat globules are reduced in size (Figure 4).

When entering the valve gap, the pressure energy is converted into velocity energy. After a thousandth of a second at the valve outlet, there is again a large change of velocity into pressure, which causes turbulence. Due to this intensive mechanical treatment, first at the entrance to the narrow valve gap there is a deformation and stretching of the fat globule, and at the exit, the final splitting into smaller globules occurs. After splitting or comminution of fat globules, the fat globule membrane regenerates by adsorption of proteins from milk (Figure 5). Smaller fat globules contain more protein, especially casein, so homogenized milk is whiter. Even after homogenization, milk fat is in the form of fat globules, and not as free fat.

Figure 5. Appearance of fat globules before and after homogenization and distribution of casein micelles

Homogenization does not achieve absolute stability and does not prevent the movement of fat globules towards the surface (it just makes it much slower). That is why this milk is not called homogeneous but homogenized.

The main result of homogenization is obtaining a stable emulsion, which means that the size of the fat globule does not change significantly with time and with a significantly reduced tendency to move. Other advantages are:

In addition to the advantages, the homogenization process can also cause certain disadvantages of milk, such as: