Of the total milk energy value, milk fat accounts for more than 50%, especially in breeds that produce milk with a higher milk fat content. Milk fat has a high biological value and significantly affects the sensory properties of certain dairy products.

Milk fat is the most valuable ingredient in milk. The high price of milk fat dates back to the period when there was not enough butter on the market, so dairies stimulated the production of milk with a higher milk fat concentration. For years, the selection of cows went in the direction of increasing milk production and increasing the content of milk fat.

From ancient times, man has tried to produce dairy products that have a higher content of certain milk ingredients. There are several products on the market that were created by concentrating milk fat: cream and cream products, kaymak, butter and butterfat.

Cream is a product that contains all the milk ingredients, but with a higher content of milk fat, while butter and butterfat are products that contain the largest percentage of milk fat, and the starting material in their production is cream.

The cream quality depends on the physical and chemical properties of milk fat, i.e., on the properties of fat globules that are sensitive to the inappropriate “regime” during the production and processing of milk. For good quality cream, it is important that the fat is in the form of fat globules. A large number of factors affect the stability of the membrane of the fat globules, primarily nutrition, fat composition, thermal and mechanical load …. Adverse conditions, such as poor pumps, transport, storage, … lead to damage to the membrane of fat globules and separation of free fats. The separated fat creates aggregates that adversely affect the separation of milk fat from milk. The existing lipase enzymes act on free fats and lead to the release of free fatty acids, which further lead to a change in the taste and aroma of the product.

The cream quality in Serbia is regulated by the Rulebook on the quality of dairy products and starter cultures (Official Gazette of RS, 33/2010, 69/2010, 43/2013 – other rulebook and 34/2014). According to the Rulebook, cream is produced by separating fat from cow’s, sheep’s, goat’s or buffalo’s milk and must be thermally processed. Common to all products of this group is that they contain at least 10% milk fat.

According to the Rulebook on the quality of milk products and starter cultures, all products of this group can be placed on the market as:

In the production of heat-treated cream, it is allowed to add additives, in accordance with the regulations governing additives

Cream for coffee and cooking

Cream for coffee and cooking has a lower milk fat content, usually 10-18%, and can usually be found on the market in smaller packages.

This cream is homogenized during production after mixing with skimmed milk in order to standardize it to the desired milk fat content. The homogenization pressure is 10 – 20 MPa, at a temperature of about 55°C. It is pasteurized at a temperature of 85-90°C, for 15 to 20 seconds, and then cooled abruptly to 5°C. If it is planned to be stored for a longer period of time, then it is sterilized and aseptically filled.

Coffee cream should be viscous, have good thermal stability and should not flocculate when added to hot coffee.

Whipped cream or sweet cream is used to make/whip cream for various desserts. Whipped cream can be found on the market as a pasteurized or sterilized product. You can also find whipped frozen cream.

In addition to good taste, a good whipping property is also important, whereby foam is obtained with an increase in volume. A prerequisite for good whipping properties is a sufficient content of milk fat (min. 35%) and a high content of lecithin that develops quality foam. In the production process of whipping cream, mixing with air that damages the finished product must be avoided.

Before the whipping of the cream, it must stand at a temperature of 1 to 4°C, for about 24 hours, in order for the cream to mature physically, which is a precondition for having the cream whipped properly.

Fermented products can be obtained from cream, as well as from milk, by adding starter cultures. These products differ according to the content of milk fat and depending on the added starter culture, i.e., on the species and strain of microorganisms used in the fermentation process. On the Serbian market, there is usually fermented cream with a fat content of 20%, and yogurt culture (Lb.delbrueckii subsp. Bulgaricus, S. thermophilus) is used as a starter culture. Cream with a lower or higher milk fat content is less common (12%, 25%, 30%), and the so-called Lactococcus lactis is also less commonly used for the production of fermented cream (Lactococcus lactis subsp. lactis, Lactococcus lactis subsp. cremoris, citrate positive lactococci Leuconostoc mesenteroides subsp. cremoris).

Fermented cream has a solid homogeneous consistency, has a pleasant lactic acid taste, which depends on the starter culture used. The cream obtained by fermentation with the use of yogurt culture is more acidic, with a less pronounced aroma than the cream obtained by fermentation using mesophilic lactic acid bacteria, i.e., by applying Lactococcus lactis. It is often used as a spread or for cooking.

A high degree of hygiene is very important for good product quality. The most common defect in fermented cream is the development of yeast and mildew on the surface.

The Rulebook defines the basic characteristics that fermented cream must meet:

as well as the name under which they are placed on the market, depending on the type of applied starter culture:

Separation of cream – by a separator. Due to the difference in density, under the action of centrifugal force, cream and skim milk are separated.

Homogenization is a standard industrial process, which aims to stabilize the fat emulsion. The homogenization process causes the fat globules to split into much smaller units, thus reducing the separation of cream, as well as the tendency to clump or coalesce. The result is a reduction in the diameter of the fat globules.

The homogenized cream is heat treated at 90°C for 5 minutes. Other appropriate combinations of time and temperature may be used. (See Pasteurization)

If an active starter culture is used, about 2 to 2.5% is added. It is recommended to use lyophilized deep-frozen cultures which are added according to the manufacturer’s recommendation.

In order to stop the activity of microorganisms and prevent a further drop in pH, i.e., the increase in acidity, the cream is cooled. When transferring cream from the fermentation chamber to the refrigerator, care should be taken to transfer the cups carefully, so as not to disturb the structure of the fermented cream. The cream is stored at least 24 hours before distribution on the market. 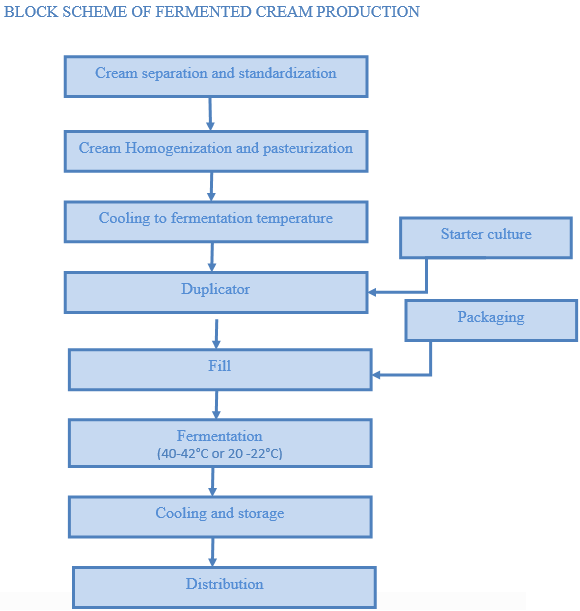 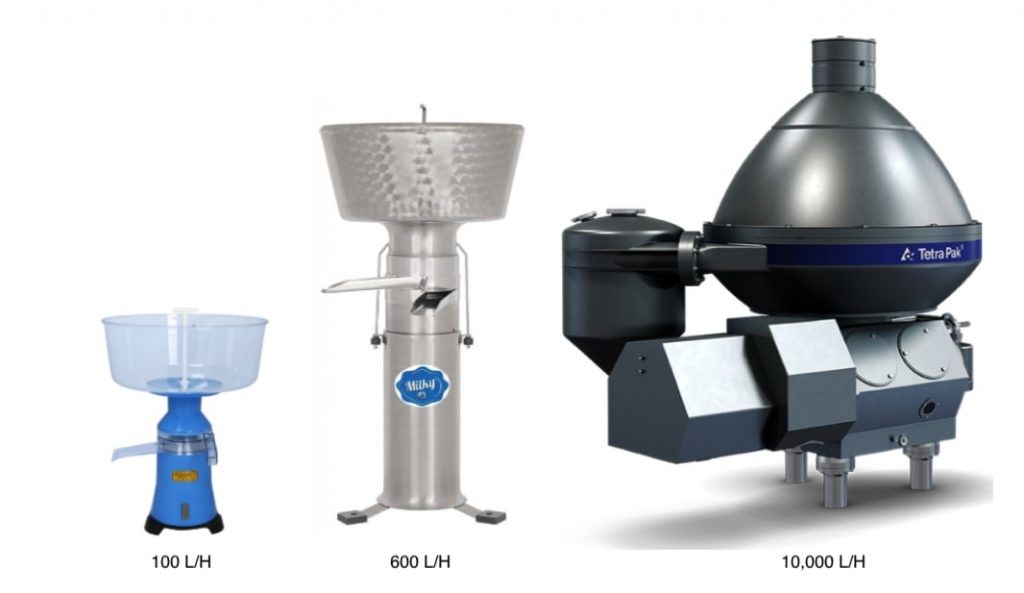 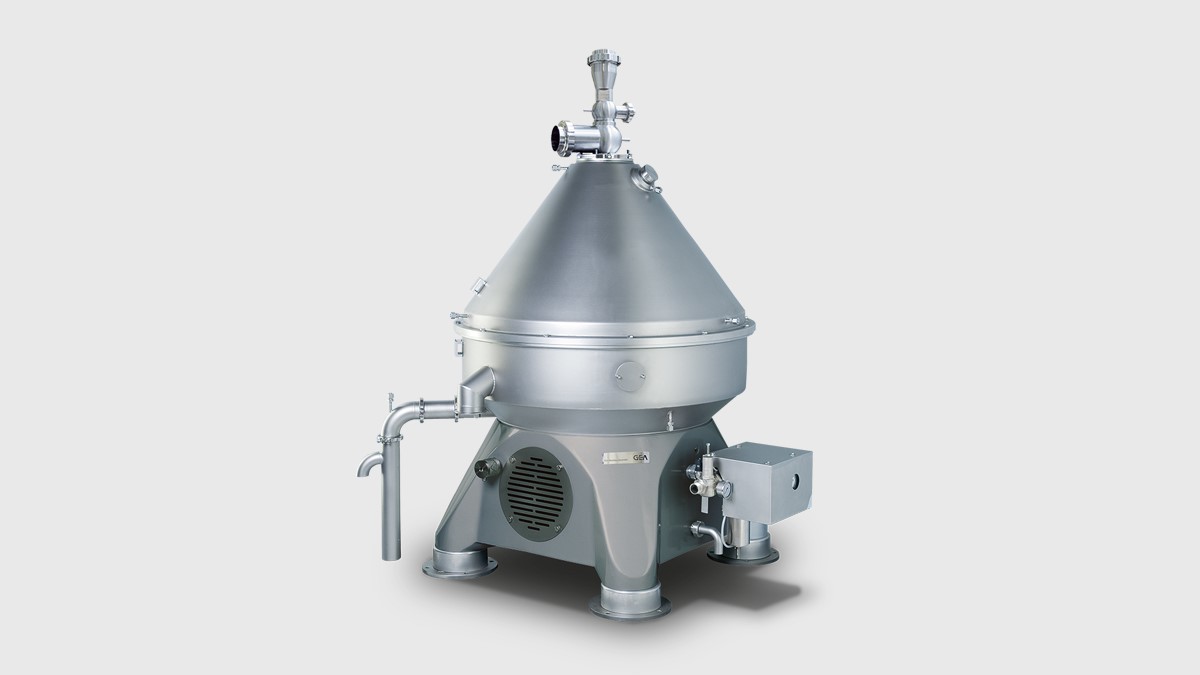 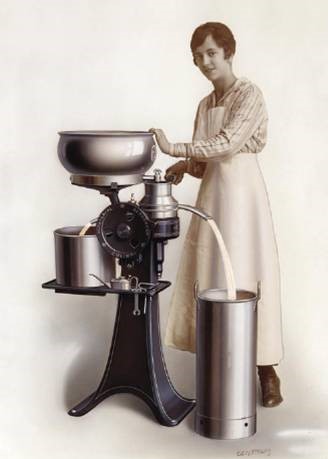 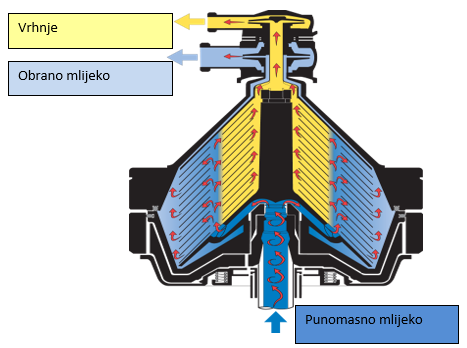 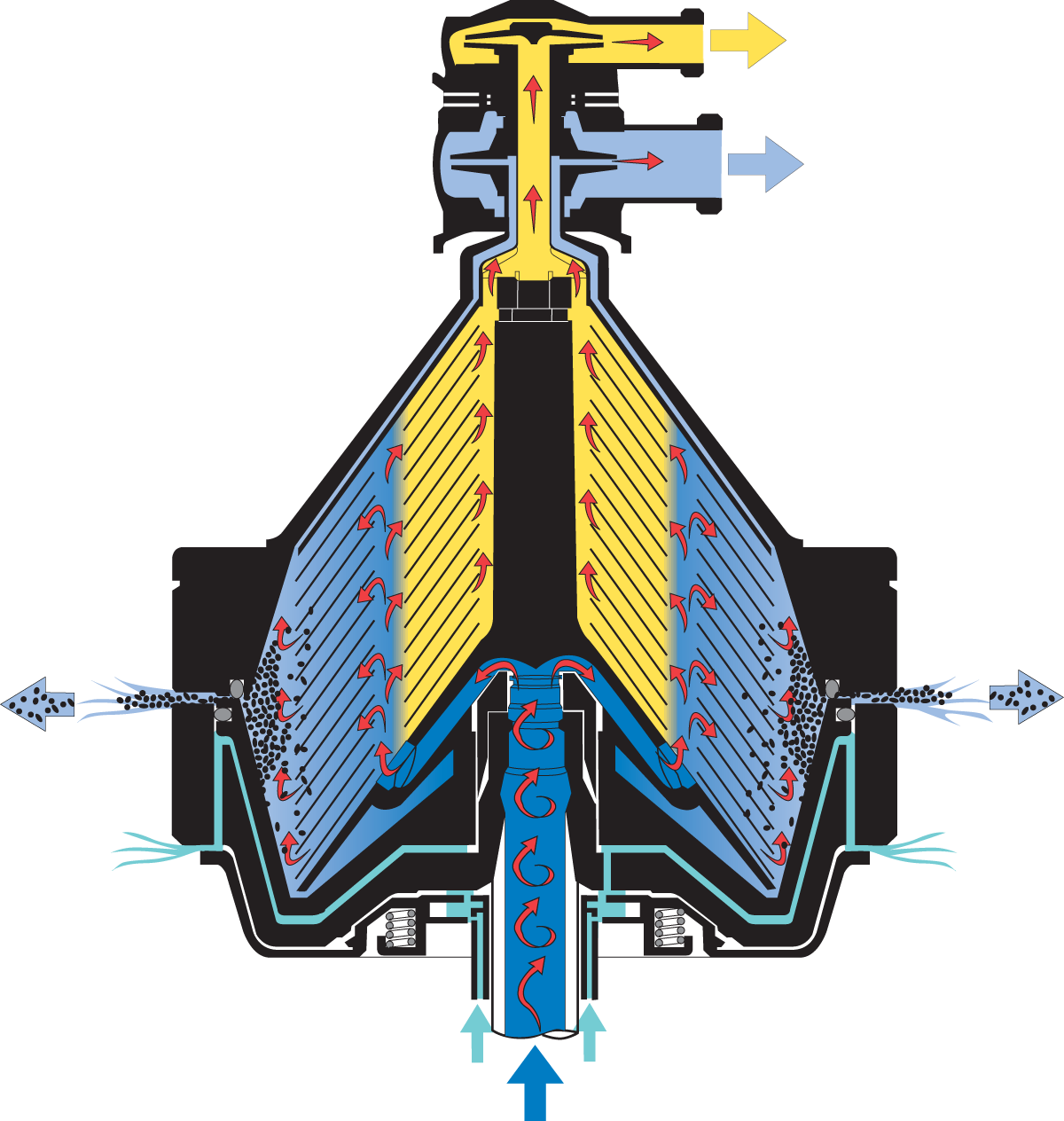 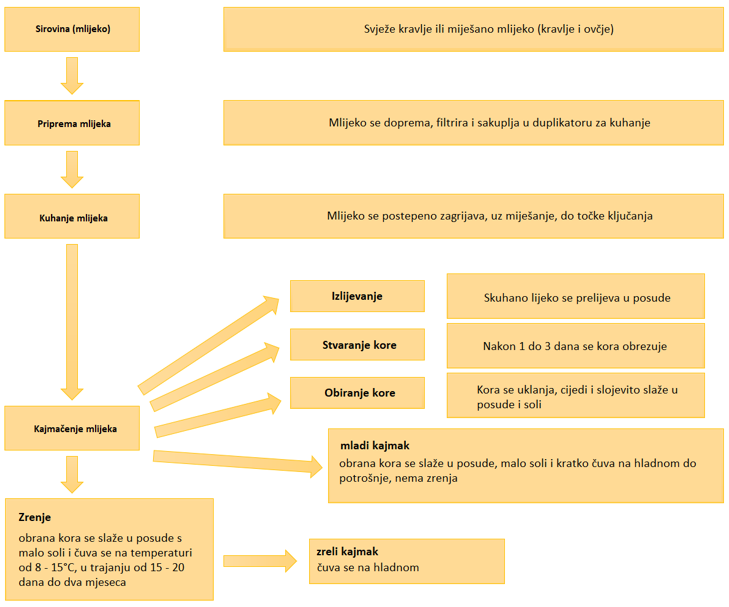 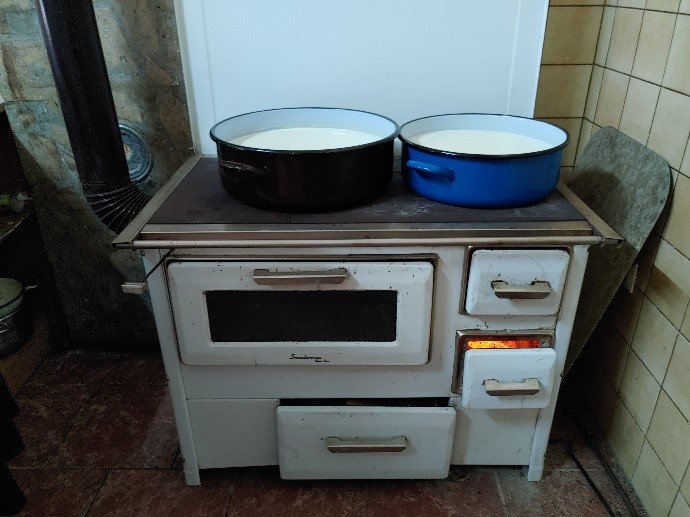 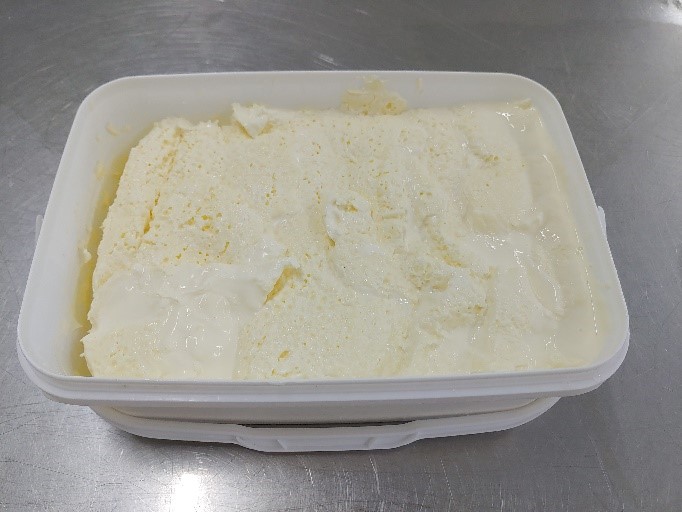 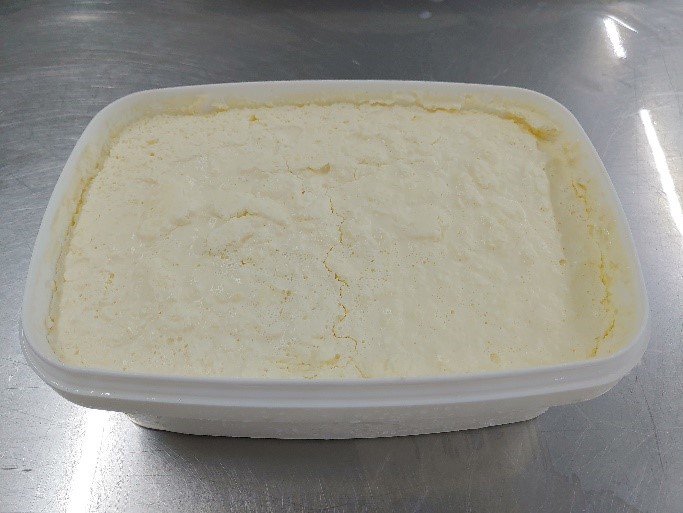 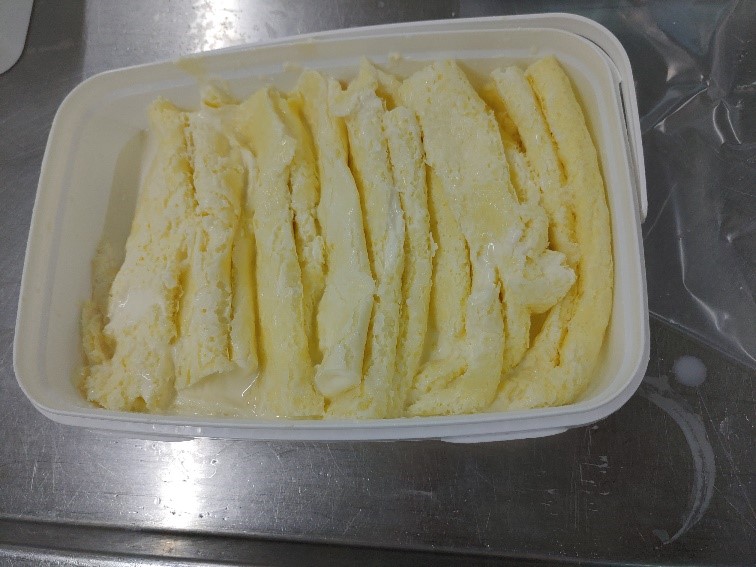 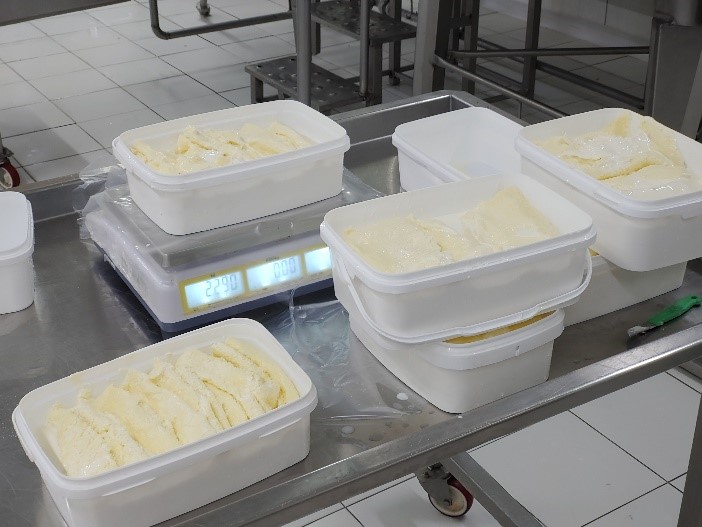 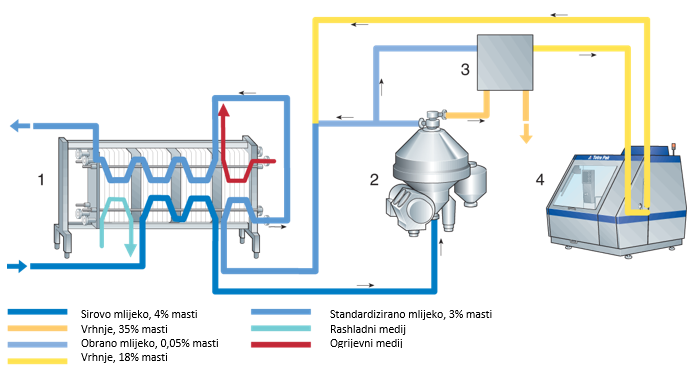 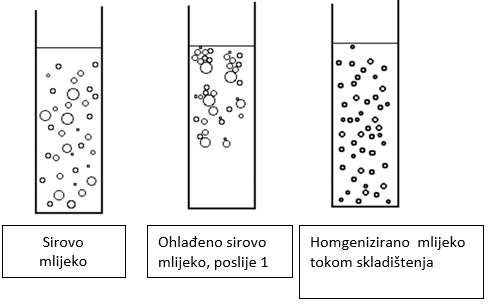 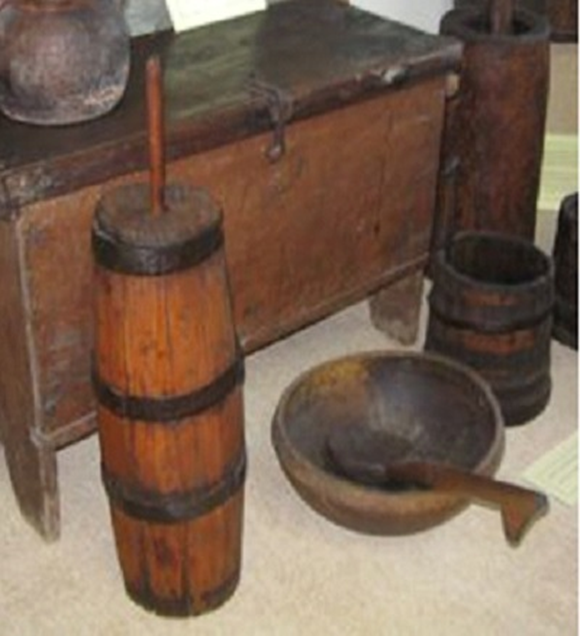 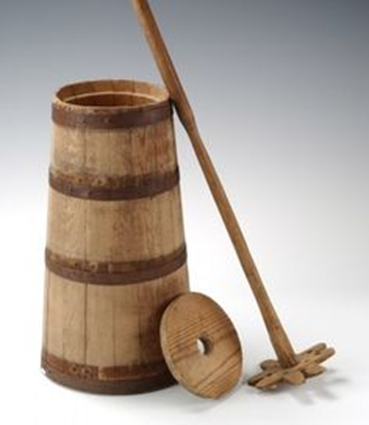 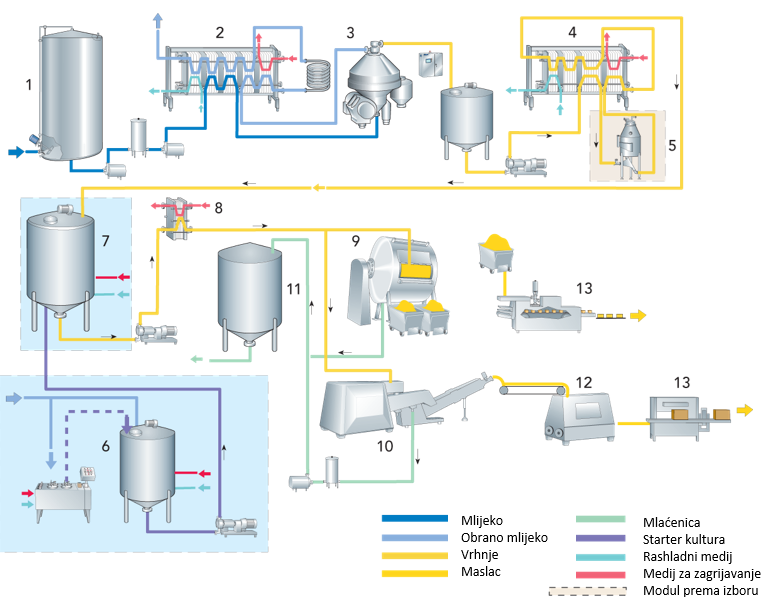 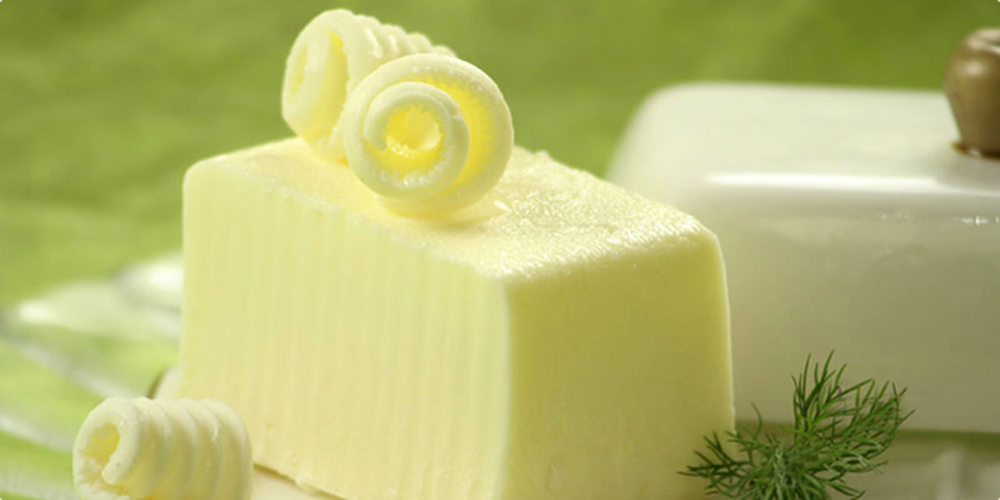 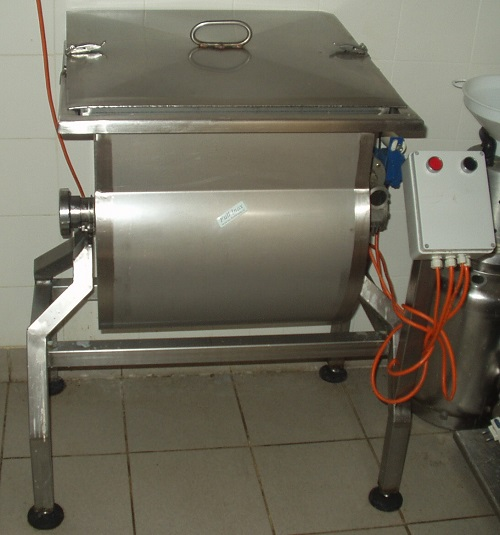